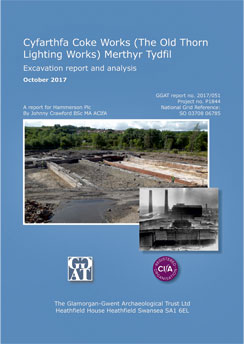 The Glamorgan-Gwent Archaeological Trust Ltd (GGAT Projects) were commissioned by Hammerson plc. to undertake an archaeological excavation and watching brief in advance of a development on the site of the former Thorn Lighting Works and Cyfarthfa Coke Works, Merthyr Tydfil, in order to fulfil the conditions of their planning permission to redevelop the site. The majority of the archaeological work was undertaken over the summer of 2013, with a watching brief continuing into late 2013.

Archaeological remains relating to the whole of the period of operation of the Cyfarthfa Ironworks were discovered, providing a fascinating insight into the history of the works. The earliest, and most unexpected, recorded remains were a section of the canal built by Anthony Bacon for the works in the late 18th century, which included a lading ramp, and a passing place for tub boats. This canal was in existence from at least 1777 and was finally phased out of use by 1840. The canal was then re-used to contain a brick culvert supplying water to the coke yards, before being buried and lost by later development. This later development included ephemeral remains relating to the operation of the coke yard between the late 18th to mid-19th centuries. These features included stone tramway sleepers, culverts and other related structures. The remains of a set of Thomas coke ovens were also recorded, which date to between 1851 and 1856. Although damaged, these remains are some of the only archaeologically examined Thomas ovens of this period and have provided new information on the construction of this important transitional technology.

The most extensive remains uncovered were those of the Coppée coke ovens and associated coal washery. The layout of the Cyfarthfa Coppée ovens, which date to 1882, was unique, consisting of a double row of ovens separated by a central storage area. The Coppée ovens were part of an attempt to modernise the works by conversion to the production of steel and huge investment was made. The facility was provided with a Carr’s disintegrator for reducing the washed coal to a size suitable for use in the Coppée ovens but the system was modified in 1894/5 by the addition of a Sheppard Feldspar Washer, and both phases the system were visible in the recorded remains. The remains of the Sheppard equipment are the only archaeologically examined remains of this type of plant.

The Coppée coke ovens themselves were heavily truncated, although the north battery and associated heat flues were comparatively intact, providing valuable information on the construction and operation of these features. It is evident that part of the ovens was subject to remodelling, either through repair of heat damage or modification of the design; the work carried out at Cyfarthfa is the first time the remains of a Coppée coke oven has been archaeologically recorded and is likely to become a site type reference for future work in industrial archaeology.

The Cyfarthfa Ironworks finally closed in 1919 and had been demolished by 1926. Minor features relating to the later use of the site by the Thorn Lighting works, built in 1947, were recorded; these included a number of manhole covers and service pipes.

A laser scanning survey was conducted to record all upstanding remains prior to construction of the development. The data obtained is of sufficient quality to allow the construction of a 3-D model should it be required and will be a highly valuable resource for future researchers.

Analysis of a wide range of artefacts recovered confirmed the broad date range for the operation of the Cyfarthfa site, spanning the 18th, 19th and 20th centuries, although material from the early 20th century predominated. This analysis of the material has yielded information ranging from the type of hand tools being used to the type of bricks and mortars being used at the site and is an invaluable addition to the general body of knowledge concerning the operation of the Cyfarthfa works.

The extent of survival of structural remains strongly suggests that archaeological features relating to the operation of the works will survive outside the development area. This should be borne in mind when considering any future potential development in these locations.

A highly successful open day, facilitated by Hammerson plc., was held for local residents, at which approximately 1500 people took the opportunity to view the remains. The large attendance clearly demonstrated the high level of interest in archaeological remains of the iron industry in Merthyr Tydfil.

Archaeological Services Wales is the trading name of the commercial archaeological department of the Glamorgan-Gwent Archaeological Trust. Since its foundation in 1975, the Trust has carried out over a thousand projects including excavations, watching briefs, field evaluations, desk-based assessments, environmental impact assessments, building surveys and more. The Trust is an independent limited company with charitable status that employs professional archaeological and heritage staff.

Please see here to find out more about us, our activities and our forward strategy